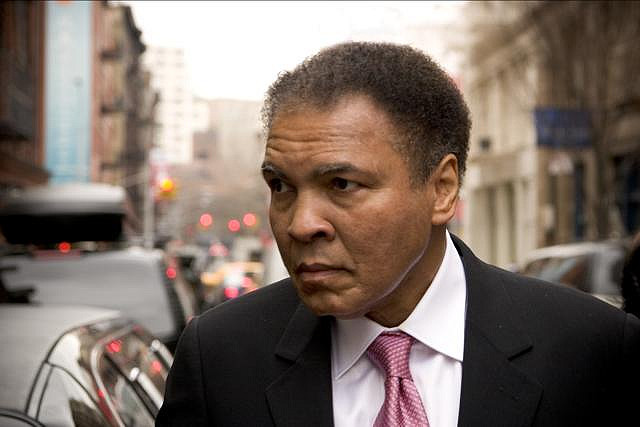 So this photo is going around tumblr and I’d figure I’d chime in with a photo I took of Ali in Soho during my first year of pediatric residency:

I was walking in Soho in NYC and saw a hand sticking out of a limo shaking the hand of a very excited homeless gentleman. The guy had the biggest smile and kept saying “You’re the greatest man!” So I got closer and looked in and saw that it was Ali. He rolled up the window and the limo drove for a few blocks and parked on the side of the street. So I walked down to where the limo was and after about 5 minutes, Ali got out and I just went up to him and took probably 10 pictures. He started posing for me giving me his “fight stance” but i thought the one that captured him best was the photo that made him appear as he is today. The Parkinson’s Disease has really gotten him. He was shaking, his face never changed from the expression i caught, and he just kind of shuffled as he was posing trying to retain what he used to have. Definitely one of the greatest photo experiences I’ve had. There was an African-American man who walked by me prior to Ali getting out of his limo who asked me who was in there. I told him who it was and the man got the biggest smile on his face and we ended up talking for a few minutes about what Ali meant to him as a young black man when Ali refused to go to vietnam. Conversations like that in NYC are kind of rare. Most people just keep to themselves.